Meyer’s ministry was worldwide, but his base was London. He was born and educated there, held pastorates at some of London’s largest free churches, and conducted his moral crusades from that city.

An ardent Baptist and premillennialist, Meyer applied Christian principles to social ills such as drunkenness, prostitution, unmarried mothers, and unwanted children. One of his best crusades occurred in 1911 when he successfully stopped a prize fight that was to be held at Earl’s Court between Jack Johnson of the United States and a British contender. Meyer endured scorn for his efforts: a London newspaper called him “Meddling, Maudlin Meyer.”

Meyer was involved in the Blue Ribbon movement (prohibition); the Purity, Rescue, and Temperance work of the Central South London Free Church Council (which closed brothels and counseled prostitutes); and the Homeless Children’s Aid and Adoption Society. He served as president of the National and World Sunday School Unions, president of the National Union of Christian Endeavor, and founder of South London Missionary Training College. He was also the author of more than seventy books. He preached around the world. Melbourne Hall (Leicester), a center of social and evangelistic activity, was built in 1881 under his leadership.

Frederick Brotherton Meyer 1847-1929 English Baptist clergyman. F.B. Meyer was born in London and educated at Brighton College. Between 1870 and 1895 he held several successful pastorates. Between the years 1872 and 1874 he met D.L. Moody and introduced him to the British churches. During much of Meyer's ministry he engaged in social work and temperance work. He headed a movement to close saloons, was the force in closing nearly 500 immoral houses, and labored for the reclamation of released prisoners. In 1904 to 1905 he served as president of the National Federation of Free Churches, and thereafter was evangelist for that organization, conducting missions in South Africa and the Far East. For many years he was closely associated with the Keswick Conferences. He died in his 82nd year. -SOURCE 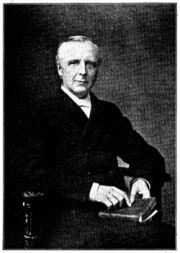 Meyer was born in London. He attended Brighton College and graduated from London University in 1869. He studied theology at Regents Park Baptist College.

Meyer began pastoring churches in 1870. His first pastorate was at Pembroke Baptist Chapel in Liverpool. In 1872 he pastored Priory Street Baptist Church in York. While he was there he met the American evangelist Dwight L. Moody, whom he introduced to other churches in England. The two preachers became lifelong friends.

Other churches he pastored were:

In 1895 Meyer went to Christ Church in Lambeth. At the time only 100 people attended the church, but within two years over 2,000 were regularly attending. He stayed there for fifteen years, and then began a traveling to preach at conferences and evangelistic services.

He spent the last few years of his life working as a pastor in England's churches, but still made trips to North America, including one he made at age 80.

Meyer was part of the "Higher Life movement" and preached often at the Keswick Convention. He was known as a crusader against immorality. He preached against drunkenness and prostitution. He is said to have brought about the closing of hundreds of saloons and brothels.

Meyer wrote over 40 books, including Christian biographies and devotional commentaries on the Bible. -SOURCE